When financial markets turn volatile, some investors show their frustration by fleeing the markets in search of alternatives that are designed to offer stability.

For example, in the first quarter of 2018, investors pulled $63 billion from U.S. stock funds based on uncertainty over market direction.1

For those looking for a way off Wall Street’s roller-coaster ride, annuities may offer an attractive alternative.

Meanwhile, the money used to fund the contract grows tax deferred. Unlike other tax advantaged retirement programs, there are no contribution limits on annuities. And annuities can be used in very creative and effective ways.

One strategy combines two different annuities to generate income and rebuild principal. Here’s how it works:

An investor simultaneously purchases a fixed–period immediate annuity and a single premium tax-deferred annuity, dividing capital between the two annuities in such a way that the combination is expected to produce tax-advantaged income for a set period of time and restore the original principal at the end of that time period. 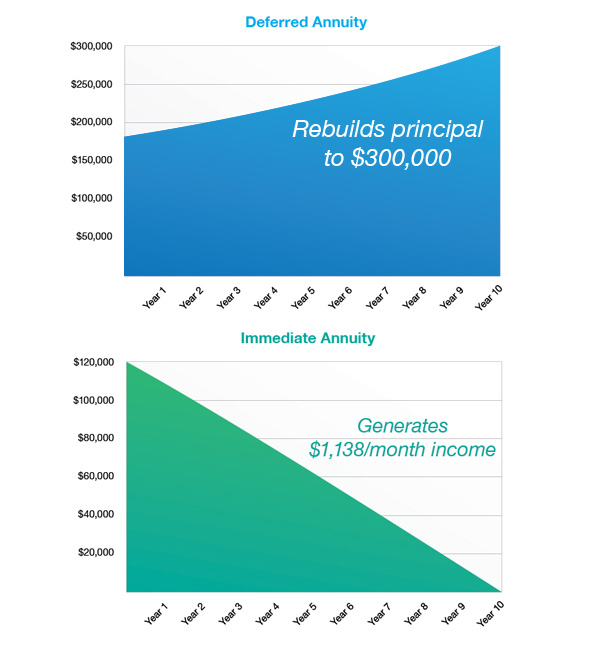 Fast Fact: Fixed or Variable. Of all annuity contracts purchased in 2017, about 47% were for variable annuities, and 53% were for fixed annuities.
Source: Financial-Planning.com, February 2, 2018

Annuities have contract limitations, fees, and charges, including account and administrative fees, underlying investment management fees, mortality and expense fees, and charges for optional benefits. Most annuities have surrender fees that are usually highest if you take out the money in the initial years of the annuity contract. Withdrawals and income payments are taxed as ordinary income. If a withdrawal is made prior to age 59½, a 10% federal income tax penalty may apply (unless an exception applies). Annuities are not guaranteed by the FDIC or any other government agency. With variable annuities, the investment return and principal value of the investment option are not guaranteed. Variable annuity subaccounts will fluctuate with the market. Keep in mind that the return and principal will fluctuate as market conditions change. The principal may be worth more or less than its original cost when the annuity is surrendered.

Variable annuities are sold by prospectus, which contains detailed information about investment objectives and risks, as well as charges and expenses. You are encouraged to read the prospectus carefully before you invest or send money to buy a variable annuity contract. The prospectus is available from the insurance company or from your financial professional. Variable annuity subaccounts will fluctuate in value based on market conditions and may be worth more or less than the original amount invested if the annuity is surrendered.